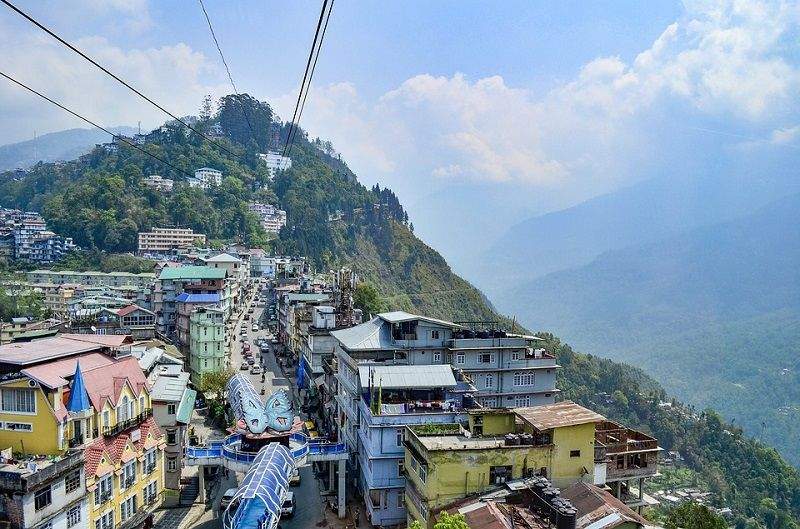 The breathtaking landscapes of Gangtok, from its snow-laden highlands, attractive valleys to serene lakes and peaceful monasteries attract tourists from the corners of the world. It is one among the popular hill stations of India situated in the heart of Sikkim.The capital city is a hub of natural beauty and here are the most irresistible places to visitin Gangtok. Make sure you cover all these on an escape to the wonderland.

Rumtekmonastery is among the most famous places to visit in Gangtok on a 2-days trip. Belonging to the Kagyu tribe of Buddhists, the monastery is truly magnificent of its style and structure. The Kagyu Buddhists moved to Tibet in the 12th century.Its architecture resembles the original monastery in Tsurphu, Tibet. Capture some of the best memories from this alluring monastery.

Settled at an elevation of 14,450ft, the Nathu-La pass is a prime passage between Tibet and India. Passing through Tsomgo Lake, Nathula Pass is noted to be world’s highest motorable roads and is a perfect destination for adventure lovers. You need to get a permit to enter Nathula Pass from the zonal office.

Things to do: Biking, strolling down the international borders and watching the active Chinese soldiers.

One of the most visited tourist places in Gangtok is the magical Tsomgo Lake. . It is ‘magical’ because of its mystical view and turquoise water that will leave you awe-struck. Also called Changu Lake, it is situated in the Nathula Highway at an altitude of 12,400ft. This glacial beauty amid the hills of Sikkim is a true example of hypnotic example.

Things to do: tea and hot noodles in the eateries, Mule and Yak rides, a stroll over the frozen lake during winters.

One of the most alluring places in Gangtok is Hanuman Tok, an age old temple of Lord Hanuman situated at an altitude of 7,500ft. You can experience the best sight of the Kanchenjunga from Sikkim. Not just the spiritual essence but the serenity of the place also attracts tourists since ages now.It will make you feel as if you are in a zen-like state.

Things to do:Temple walk, Kanchenjunga Biosphere Reserve, basking under the sun in a peaceful ambiance

Kanchenjunga Biosphere Reserve is one of the biggest natural habitats in the town of Gangtok, boasting rich biodiversity of flora and fauna. It includes all normal, endangered and extinct species of plants and animals. The biosphere reserve is spread across an area of 850sq.km and is one of the rare high altitudes reserves in the country. Some of the spotted wild animals include the snow leopards, Himalayan Tahr and Musk Deer. Do not leave the camera in your hotel room; you willregret it for life.

Things to do: One of the famous things in Gangtok is hiking and trekking that you can experience on your way to the reserve, Spotting a snow leopard and animal safaris.

Namchi, meaning ‘top of the sky’, is one of the best tourist places to visit in Gangtok. It allows the visitors to witness the Kanchenjunga range – Oh, that picturesque scene! You can also have the marvelous view of Rangit Valley as well. Allure the Guru Padmasambhava statue set at a height of 135ft on the Samdruptse valley in Namchi. So, do not forget to add Namchi in the list of itineraries you must visit in Gangtok.

Things to do: Go on a trek to the nearby valley and click stunning pictures of the spectacular Kanchenjunga range from Namchi

If you are a peace lover, you will have a quality time in Do DrulChortenStupa. The place is encircled by almost 108 prayer wheels and is among the most beautiful places to visit in Gangtok. Usually less crowded, it is a perfect place to connect with nature and soak in that eternal peace you craved for quite some time. You can’t get away with the immensely pleasing spiritual vibes anytime soon.

Located in North Sikkim, Yumthang Valley is haven on earth for peace seekers. Replete with picturesque beauty and natural wonders, the valley is home to zillion of colorful flowers, a serene river and magnificent mountains. It is also named as ‘Valley of Flowers’ by some as the one in Uttarakhand.

Special attractions: Trek to the Shiva Temple through the pine forests and along the River Yumthang. Next post How to Pay Employees in QuickBooks Online Without Payroll?